USATT ANNOUNCES THE COACH OF THE YEAR AWARDS FOR 2020 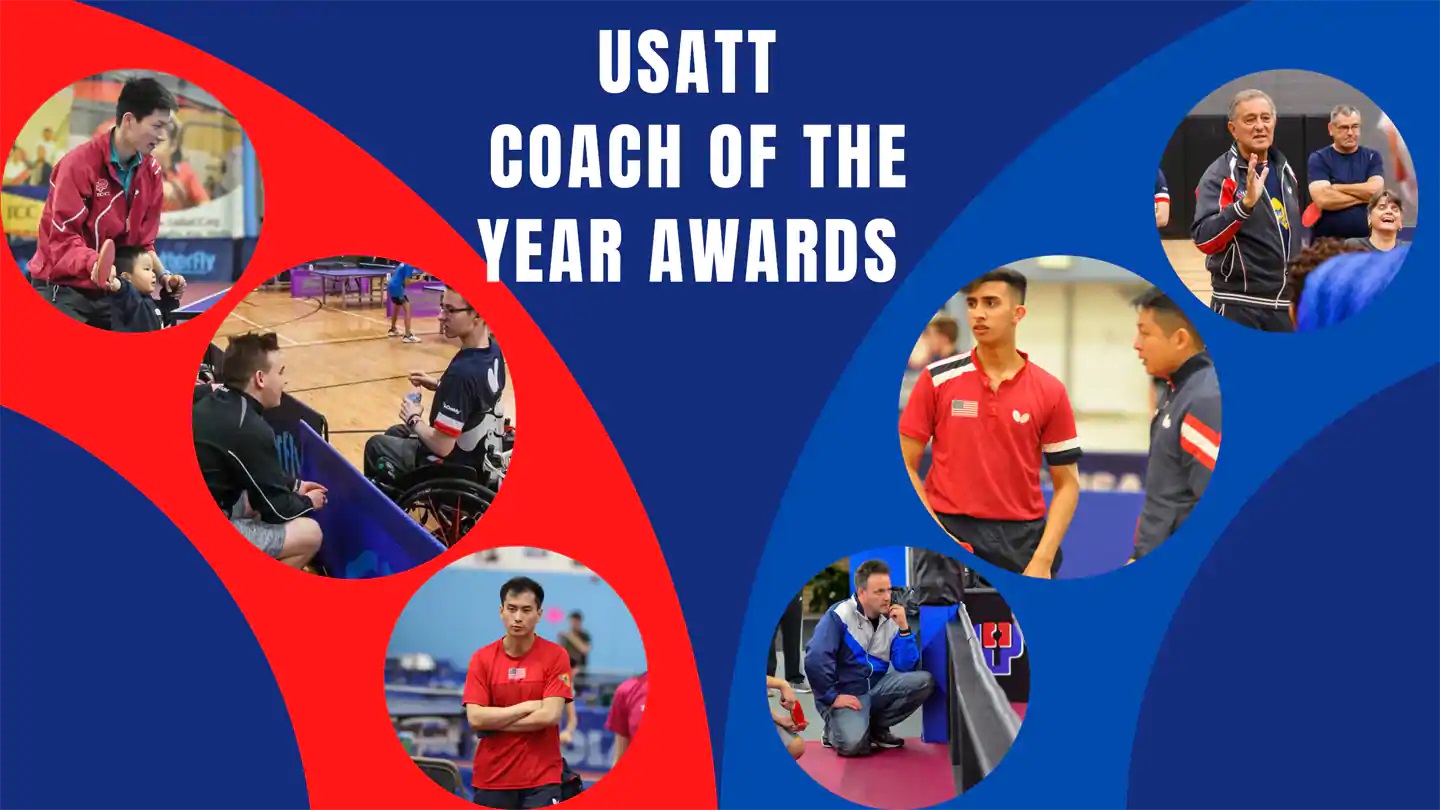 The 2020 Coach of the Year Selection Committee is proud to announce the following awards for superior excellence in coach duties for 2020: 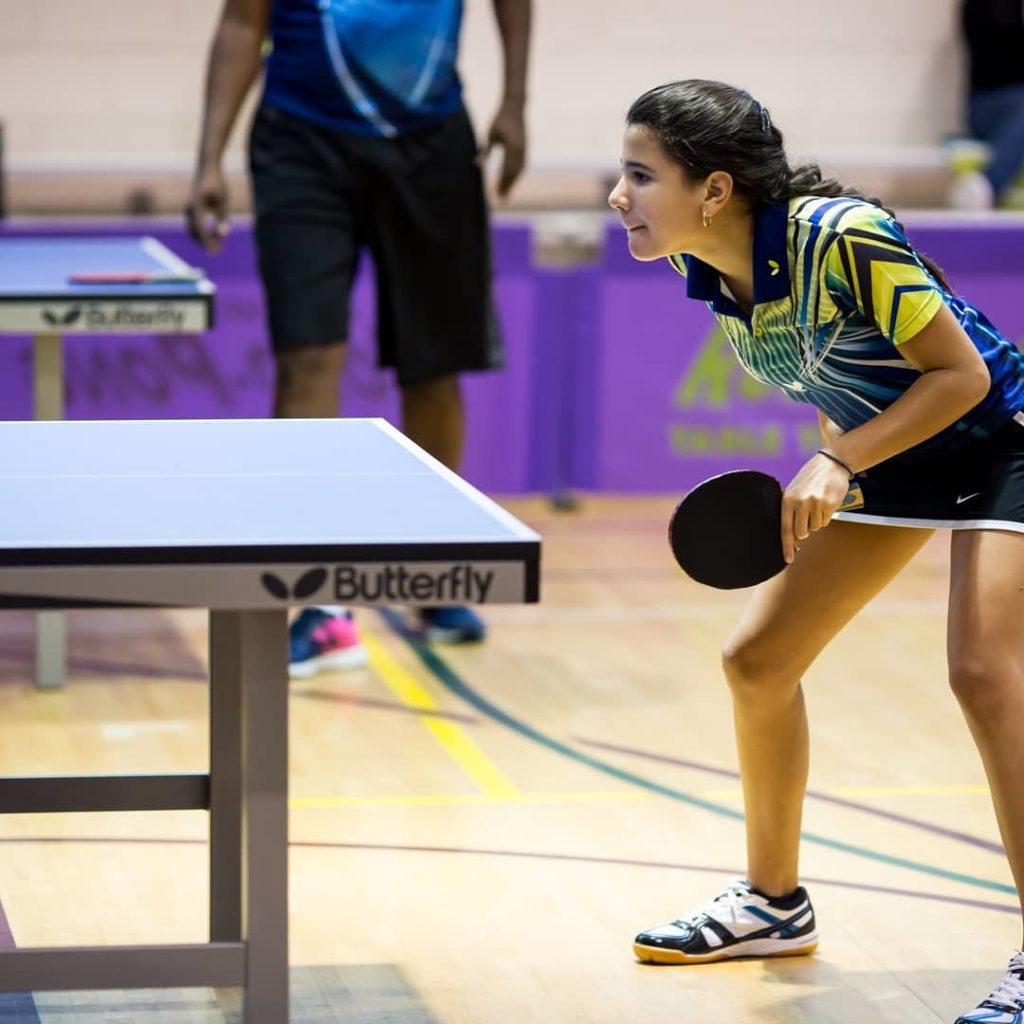 LAKELAND — Perhaps in two to six years, Sherlyn Barvie Perez of Tampa will appear on TV standing atop a three-stage podium draped with a gold medal and silently singing the Star Spangled Banner.

Watch out Tokyo or Paris.

The rising 15-year-old table tennis star, a native of Cuba, said she aspires to represent her new country in the sport at the Summer Olympics. It’s no mere daydream.

USATT Awards Paralympic Coach of the Year to Gary Fraiman 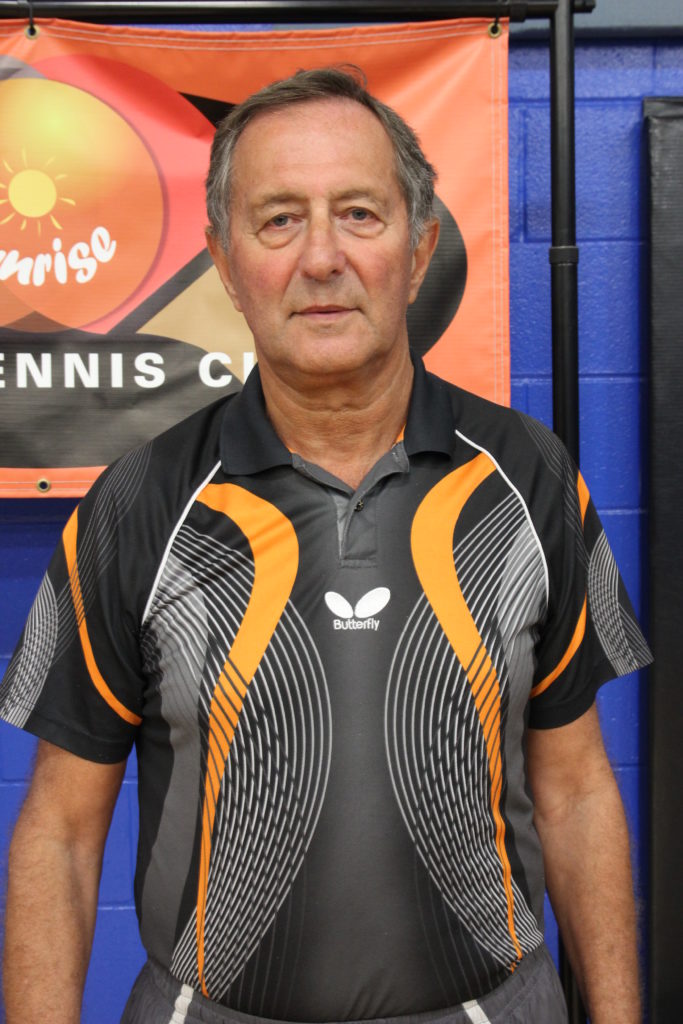 “It is an honor and a privileged to be selected as the 2016 Paralympic Coach of the Year. I find it very rewarding to be coaching Para players at this point in my coaching career and I look forward to doing so for many years to come.” Gary Fraiman

“Gary is very dedicated to the growth and development of the Para program and the athletes he personally coaches. Gary is very accommodating and ﬁnds interesting techniques to improve our game in spite of the disabilities we have.” Tara Profitt, USATT Athletes Advisory Chair.

About USA Table Tennis
USA Table Tennis is organized under the United States Olympic Committee as the National Governing Body for the sport of table tennis in the United States. As a member service organization it promotes table tennis by creating opportunities for athletes and coaches of all backgrounds to participate in the sport through more than 250 clubs and over 350 tournaments across the nation annually. USA Table Tennis is a member of the International Table Tennis Federation (ITTF), and is responsible for selecting and training teams for international competition including the Pan American and Olympic Games.

Tip of the Month: How to Play Practice Matches with a Weaker Player 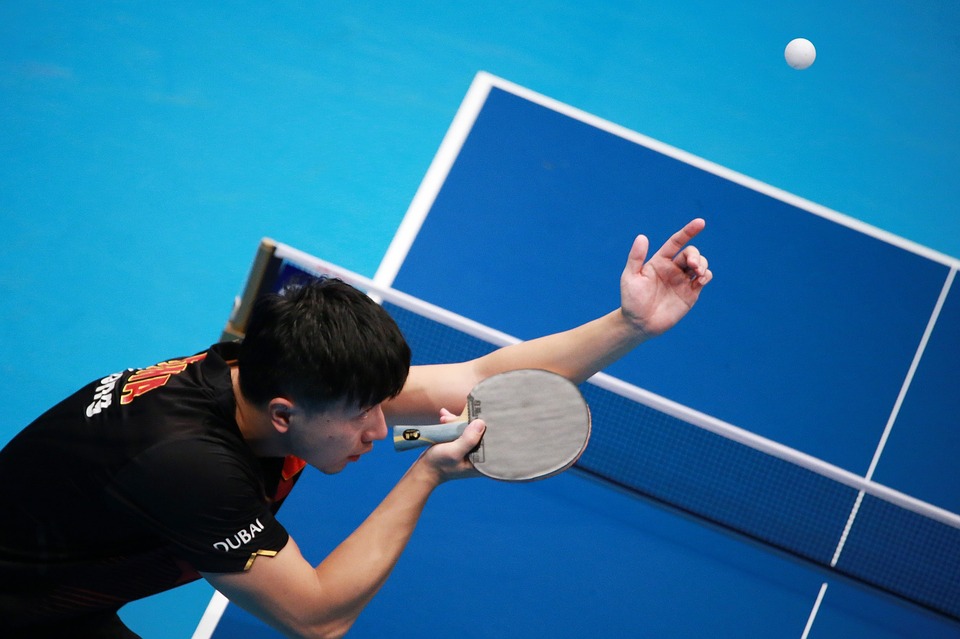 When playing practice matches with much weaker players, here are two suggestions: 1) Simplify your serves so you get higher quality returns to practice against; and 2) Decide something specific you want to work on, such as forehand loop, and use your higher level technique to force rallies where you can work on those shots. For example, serve short backspin and attack any long return with your forehand. If you need blocking practice, push long to them, and block. And so on.

At the same time, you should fight to win every one of these points, given the conditions above. You can practice mental focus and hustle against any level of player. You might also want to play some matches against weaker players where you ignore the above two suggestions, just to work on your “win every point” skills, including serves and using your best game, not just what you need to work on. (You might want to do this especially before a big tournament, to focus on your general match playing skills.) Some might argue you should play every match this way, even against much weaker players, but I think you lose an opportunity to practice certain things if you do that all the time.

How to Improve Mental Toughness in Table Tennis Competition 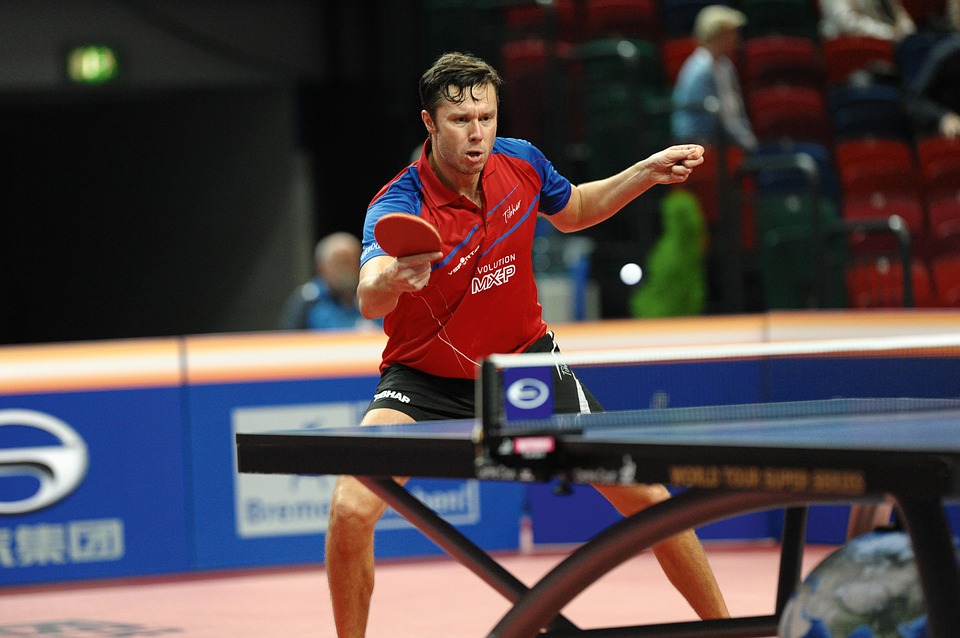 Below are Eleven Tips for Mental Toughness in Competition Table Tennis published by Dr. Robert Swoap

Have a pre-serve routine (whether serving or receiving) that is unshakable.

Have an emotion-setting routine. You will be nervous — no question. That is not the problem. The problem is interpreting the butterflies in your stomach as negative. They are not. They are your body’s way of saying “I’m ready. I’m excited.” If you are really over-the-top anxious, slow things down a bit. Take a little more time before a point to breathe from your belly and to calm your mind and body.

2. Refocus after distraction or a poor point. When Todd Sweeris was a junior, many times after he made a mistake, he would look to the crowd (anticipating negative feedback). I had Todd draw a small blue dot on his racquet that he would focus on after each point. This allowed him to prepare for the next point, leading to….

3. Next point mentality (NPM).  Once the point is over, it is over. Quickly analyze what just happened and then move on. The mentally tough player is immediately onto the next point and rally.

4. Process not Outcome.  Focus on the process of playing well. The second you think about the outcome (winning or losing), you are no longer in the present moment. You can only control the current point and the way you play it. Of course you want to win. But wanting to win (and thinking about winning/losing) isn’t the route to successfully competing. Wins come from playing each point with full intensity, courage, and composure. There is no point where you relax. And there should be no point where you over-try.

5. Thought control.  Ideally, your thoughts will remain positive throughout a match and a tournament. The reality is that you may have negative thoughts (e.g., self-criticism) pop up. That’s okay. Just don’t attach any weight to those thoughts and self-statements. They are just thoughts. Let them go without trying to force it. The easiest way to do this is to get back to #3 (NPM).

6. Confidence.  Confidence is easy when you’re playing well. But what about if things aren’t going so well. Remind yourself of how hard you have prepared for this and don’t allow your mind to move to negativity. Sean did this very well. He had a set of positive affirmations that he would repeat before a match and during visualizations. This got him into a confident mindset that translated to…

Rule #1: Try for EVERY ball

8. Display mental toughness.  This mentality in #7 translated to an intensity in competition that was hard to ignore. It demonstrated to Sean’s competitors that they couldn’t beat him by getting into his head. They knew they would have to beat him tactically.

9. Reframe.  A mental trick you can use when the game is tight (say 10-10) is to reframe the score in your head as something like 4-4.  How would you play a 4-4 point? That’s how you should play a 10-10 point. We often get tighter at 10-10 and play more conservatively. But that is moving away from your game. Always play your game.

10. Body language.  Before matches and in between points, be sure to keep your head up. When nervous or self-critical, we tend to gaze down.  Keep your head up and try to have a body language that suggests confidence, but not cockiness.

11. Have fun.  Table tennis is a blast. I have played since I was a little kid and now I’m teaching my own children. We can sometimes take it way too seriously. Remember, it is a GAME that is fun. Have a small smile on your face as you play. You’ll confuse your opponent (“Why is she smiling?!?).  And you’ll put yourself into the right frame of mind. Have fun out there. 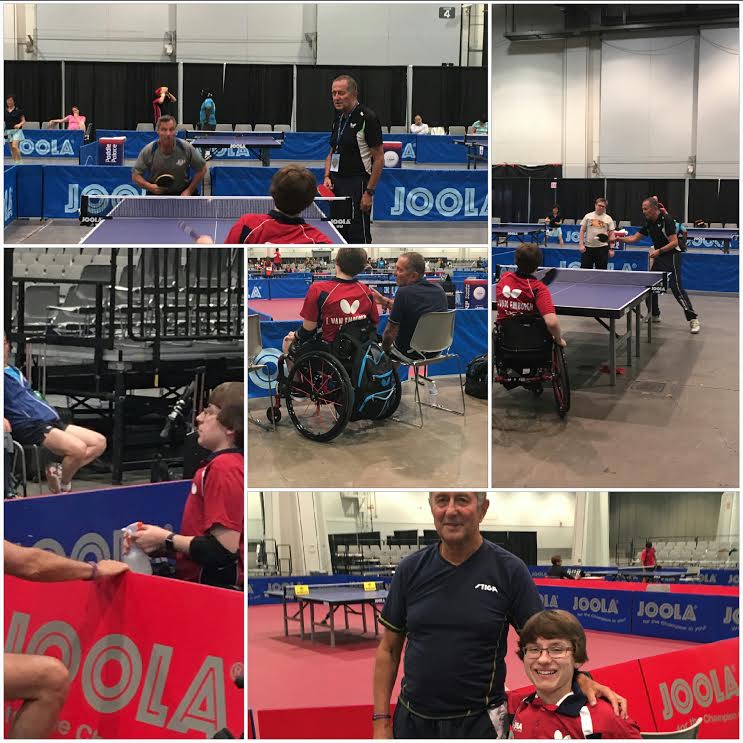 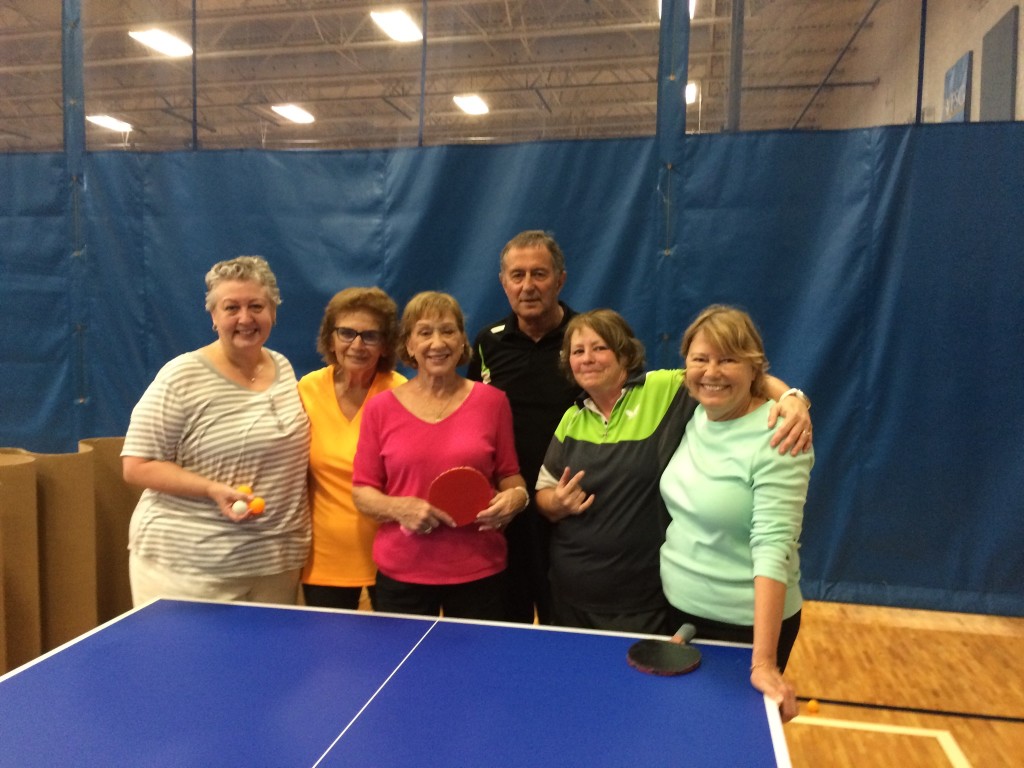 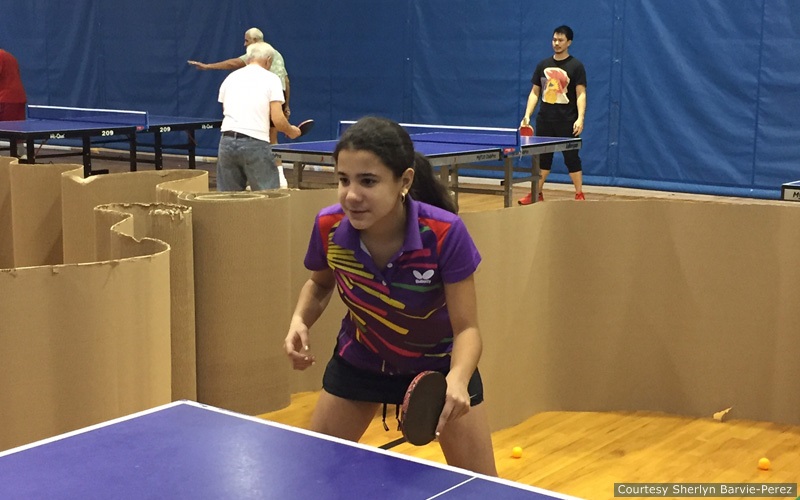 Basic forehand counter drive with returning to the ready position after completing the stroke (in slow-motion).