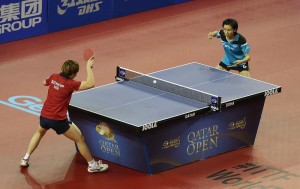 My favorite exercise is table tennis. Some people laugh when I say this at lectures, but I am very serious. “Ping Pong,” they scoff, “is only a basement recreational game.” You certainly haven’t met my mother, the one with the perfect brain. When I was a young child I would sit in the back yard, amazed that she would beat all comers on the table in our back yard. She was intense and had wonderful reflexes. I still remember watching her trying to keep up with the little white ball. I played a lot as a child with my siblings, but didn’t really become skilled until I spent three years in Germany as a young soldier in the U.S. Army. The military, as highlighted in the movie Forest Gump, has tables in almost all recreation centers. With my childhood background, I was better than most players and won several tournaments. I then developed a friendship with another solider from the West Indies, Rene, who was a championship caliber player. We spent hour after hour playing at the U.S.O in Frankfurt. One of my strategies in life is to try to be with people who are better than me at whatever I am doing. They help me be better, and losing to Rene was no big deal as long as I kept getting better. I was thrilled that at the end of my tour I was finally able to beat him. We joined a German table tennis club and spent many hours interacting with our new friends around the table.

If you are an American, you still may think that calling table tennis a sport is silly, but I think it is the best brain sport ever.  It is highly aerobic, uses both the upper and lower body, is great for eye hand coordination and reflexes, and causes you to use many different areas of the brain at once as you are tracking the ball, planning shots and strategies, and figuring out spins. It is like aerobic chess. Plus, table tennis causes very few head injuries. Table tennis, or Ping Pong, the name given to the sport by the Parker Brother’s game company to sell more equipment, is the second most popular organized sport in the world. What is even more impressive is that it is the youngest of the world’s major sports. At the competitive level, players hit the ball in excess of 90 miles per hour across the table!

Table Tennis is now recognized as an Olympic sport, making its debut in the 1988 Seoul games. You can find the sport televised throughout the world at any given time. From the “Hong Kong Invitational”  to the “Worlds Table Tennis Championships” to the “Olympics”, table tennis is completely sold out for all sessions.

In the U.S. there are many table tennis clubs and increasingly many great players. The best way to start playing table tennis is to get a table and learn the basics of the game. I often recommend getting a USATT (United States of America Table Tennis) coach to ramp up skill quickly. It will be more fun if you can play well. You can learn more about table tennis, rules, equipment, coaches and places to play at www.usatt.org.

The data on exercise is impressive and incontrovertible. Our distant ancestors exercised as part of daily life when they hunted and gathered food, fled their enemies or tracked down a mate. In the modern world, where we sit in a cubicle in front of a computer screen all day, then come home at night and slump in a recliner to watch TV, we have to make an effort to do what our ancestors did as a matter of course. Our bodies did not evolve to be motionless and inert; they evolved with muscles, hearts, and cardiovascular systems that need to be activated.

The greatest obstacle most people have in committing to regular exercise is making it a habit. People don’t think twice about brushing their teeth, showering, dressing or adjusting the rearview mirror when they climb in the car, because these activities are all habits that they’ve trained their brains to perform automatically. From your brain’s perspective, a habit is a series of actions it executes when you tell it to do so fairly automatically and without effort. But it requires many repetitions before your brain learns to automatically perform a function. Think of how many times it took before you learned to ride your bike without training wheels. The real challenge of exercise is to train your brain to make it into a habit.

The best chance of making exercise a habit, therefore, is to schedule a specific time and place to exercise each day or at least on specific days each week. Consider using the same shoes and clothing and doing the workout in the same place, but have a variety of exercises to choose from so you can vary the routine. The idea is to exercise consistently according to schedule for the first few months. After several months, you will find that you no longer think about whether you want to get out there and work out or not – you just do it. When you reach that point, it has become a habit, one that will keep you and your brain healthy and save you more money than any other single thing you ever do for your health. It’s well worth the effort.

Gary’s training with 10 years old left handed player with offence  from both sides.Now resides in Tampa Bay area with her parents. 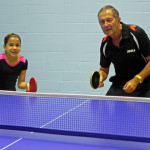 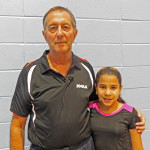 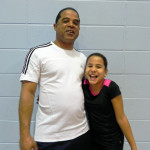 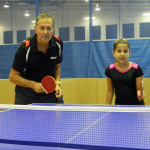 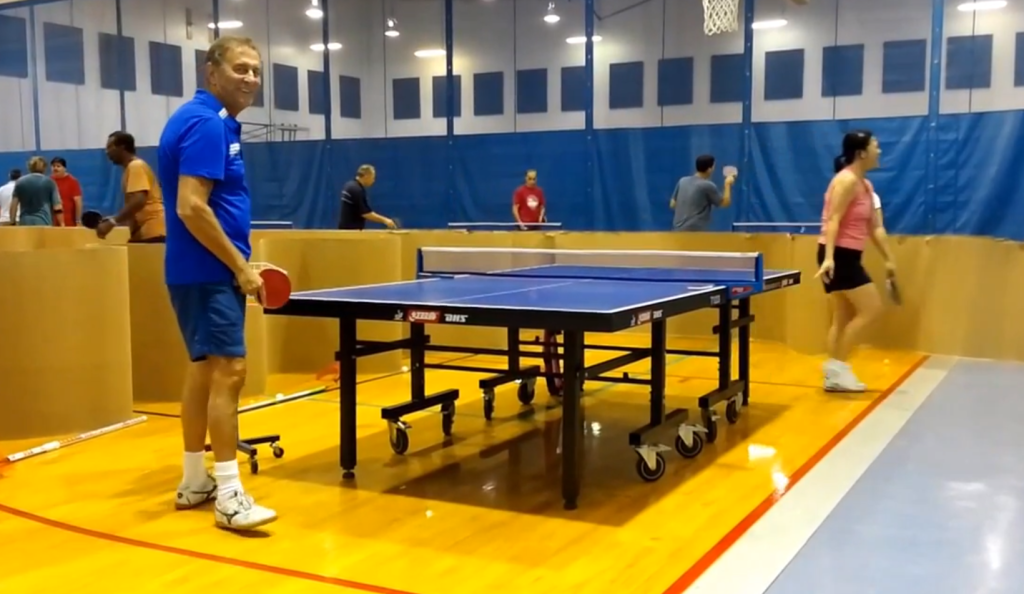 Posted on December 9, 2013 by owner
Training   2014 Sandpaper  World championship in London with Kit.
Posted in Training | Leave a comment

Three secret steps which may improve your footwork in table tennis

In table tennis, our large muscles do most of the work, but because they’re large, they’re slower than our smaller muscles, which we need to make small, quick, initiating movements, allowing crucial milliseconds for our larger muscles to begin their larger movements.

As with running, table tennis is one of the most rhythmic sports in existence, so why not apply the same principles of rhythm and movement efficiency to our table tennis footwork training?

#1 Stretch to prepare your muscles

This technique, as we’ll see below, aims to keep your heels off the ground at all times. As a result, while it does take stress off your knees, it can be a lot harder on your calves and Achilles tendons if you are not prepared properly. Stretches I’ve read as recommended by FHB for attempting this style of running are:

Hip flexors and quads: This video shows the recommended hip flexor stretch using a couch. These muscle groups are often tight among desk workers, and as a result, can lead to leaning forward too much when running or when in table tennis stance.

Glute flexibility:  Place your leg on a table top with your knee bent at 90 degrees as shown. What this picture doesn’t show is that you can lean forward to intensify the stretch, which you should feel in your glute muscle, in the back of the upper leg. You can also rotate your body 45 degrees so your ankle is hanging off the edge of the table if it’s more comfortable for you.